The idea in brief:

The idea in detail:

In June 2021, the Western Australian Government passed the Building and Construction Industry (Security of Payment) Act 2021 (the Act).

The Act was introduced to amend the State’s existing model under the Construction Contracts Act 2004 (WA) to be more in line with the ‘East Coast’ Security of Payment model that has been implemented by every state and territory in Australia, with the exception of the Northern Territory.

The Act was drafted following a review of the security of payment framework in the construction industry. This review titled Security of Payment Reform in WA Building and Construction Industry Final Report (the ‘Fiocco Report’) was commissioned in 2018 following a national review issued by John Murray AM (the ‘Murray Report’). The Murray Report largely preferred the ‘East Coast’-type models adopted in Queensland and New South Wales in coming to its recommendations for security of payment legislation frameworks Australia-wide.

The Fiocco Report identified a number of ongoing issues with the current regime which particularly affected small to medium sized businesses, but were persistent across Australia in the construction industry. In particular, the Fiocco Report identified the increased risk of payment delay or default as a result of the hierarchical contracting and the associated power imbalance between head contractors and subcontractors when negotiating contractual terms and risk allocations – with the end result being an imbalance of bargaining power that often results in deferrals of payment and other risks being principally borne by subcontractors least equipped commercially to manage them.

Similarly, and particularly relevant to Western Australia, the Fiocco Report explored the consequences of the recent industry downturn in Western Australia (mainly as a result of reduced mining-related construction) which, as submitted by numerous industry participants, has led to increased competition and businesses working under lower profit margins. This in turn can lead to cash flow shortages which predominately impact the parties sitting lowest in the contractual ‘chain’.

The McGowan Government originally tabled these changes in a bill in September 2020, however this then subsequently expired when Western Australia went to a state election in March 2021.  The Bill was then reintroduced on 25 May 2021, and received royal assent on 25 June 2021.

What will the security of payment regime now look like in Western Australia?

The new Security of Payment changes in Western Australia will include:

If the respondent fails to pay the payment claim amount or the amount stated in the payment schedule in full by the due date for payment, the claimant may either (but cannot do both):

The adjudicator will decide the amount due, any applicable interest and the due date for payment.

A review adjudicator will be responsible for reviewing adjudication decisions, which must be applied for within 5 business days of the original decision being made.

These changes are expected to commence on a date to be proclaimed.

Our Australia-wide comparison table below has been updated to reflect these changes (on the assumption the amendments are eventually proclaimed and commence). You can download the table by clicking on the image below. 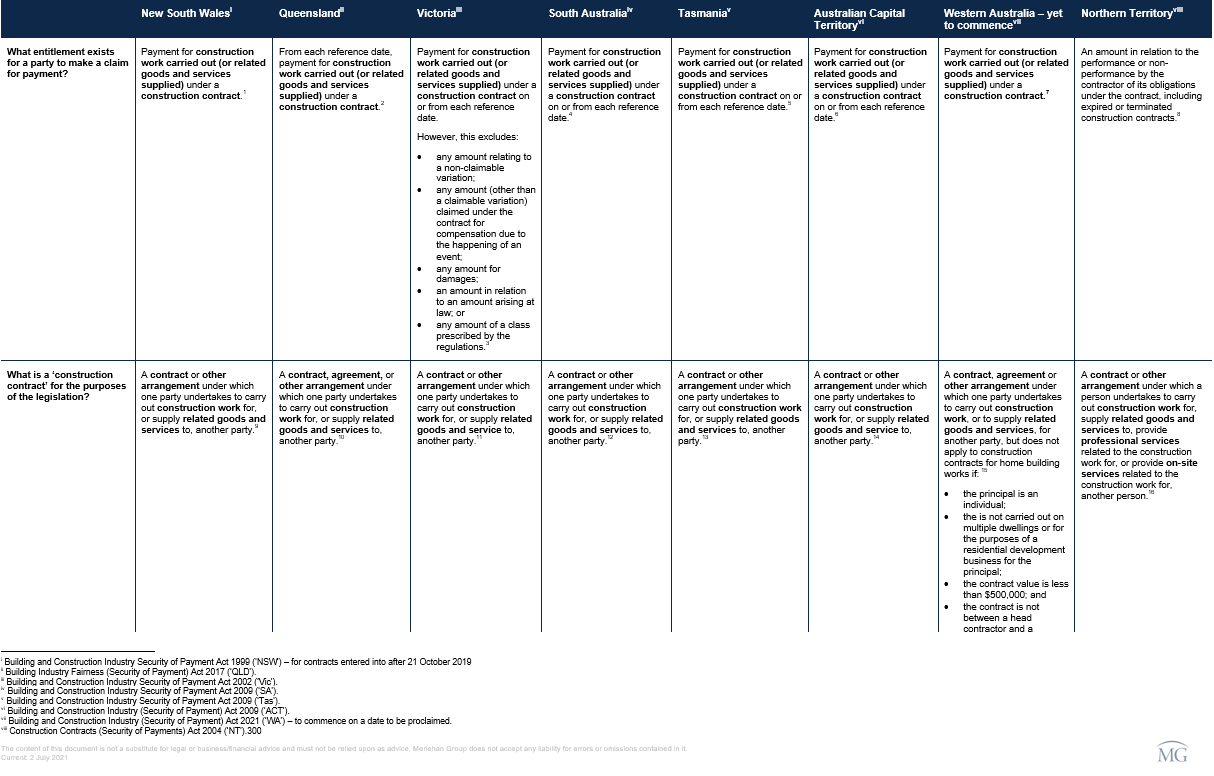 If you need assistance with pursuing or defending claims for payment under the various construction industry security of payment legislation in any State or Territory in Australia, email or contact Adam Merlehan adam.merlehan@merlehangroup.com (+6140219769) for more information.