The idea in brief:

The enclosed handout sets out the major changes, why they are relevant to your business and provides some commentary on their likely effect in the industry.

It is important, now more than ever, that all businesses in the construction sector in Queensland review and evaluate their preparedness to respond to these proposed legislative changes and begin educating key staff and decision makers to understand the likely new laws and develop modified business processes to ensure compliance with them.

The idea in detail:

The Special Joint Taskforce was established to investigate complaints of fraudulent behaviour relating to subcontractor non-payment, and to refer possible breaches to prosecuting authorities. The Taskforce’s report contained 10 recommendations for legislative, administrative and regulatory reform, all of which were accepted by the Queensland Government.

On 6 February 2020, the Queensland Government introduced the Building Industry Fairness (Security of Payment) and Other Legislation Amendment Bill 2020 (the BIF Amendment Bill) to implement some of these recommendations into law.

On 20 March 2020, the Queensland Parliament’s Transport and Public Works Committee (the Committee) released a report into its review of the BIF Amendment Bill (the Committee’s Report).

The Committee’s Report recommended that the BIF Amendment Bill be passed, and relevantly to Regulatory Oversight Reforms, recommended:

Interestingly, the Committee also sought, and was provided information by the Department of Housing and Public Works about how certain recommendations from the Special Joint Taskforce would be implemented – indicating that certain key components of the recommendations (and Government adopted policy) will be introduced by way of regulation and administrative changes, rather than legislation, they are as follows: 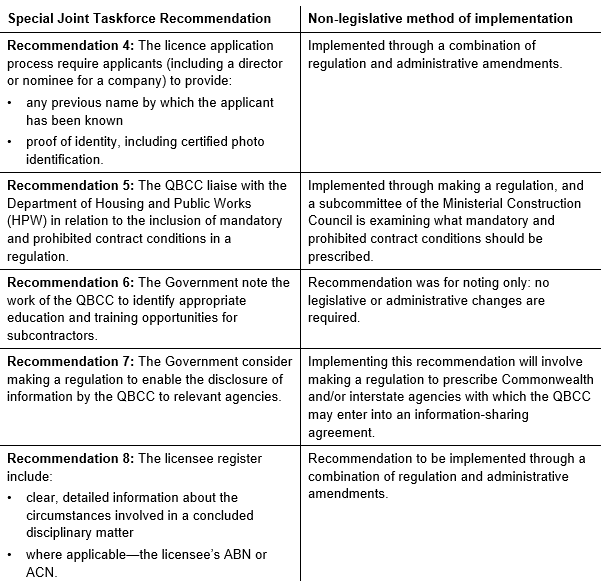 What do you need to know?

This handout summarises the key legislative Regulatory Oversight Reform changes (click image for PDF) forming part of the BIF Amendment Bill and our commentary about the impact each change is likely to have in the industry: 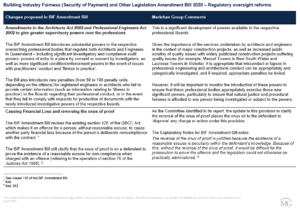 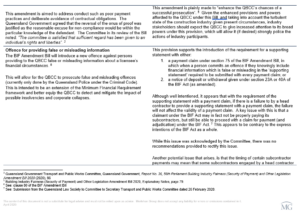 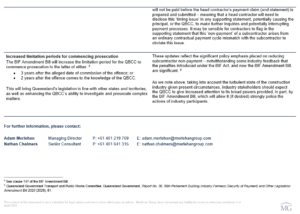 As advised in our previous update on the BIF Amendment Bill, the amendment to these laws will require each business that is involved in the construction industry in Queensland to modify the way it does business.

Given the seriousness of these changes, businesses in Queensland’s construction industry will also need to remain well informed about the legislative requirements to ensure compliance with the BIF Act.

We recommend you review the proposed laws, particularly the licence exclusions and head contractor disclosure sections, and ensure that your business is ready for their implementation.

When will these changes occur?

Given recent tumultuous events involving the COVID-19 pandemic, it is hard to say when exactly these changes will be brought into law.

Queensland Parliament has introduced a varied sitting dates program due to the COVID-19 pandemic, and the Speaker of the House now has the power to suspend Parliament until late September 2020, with the power to recall Parliament to debate urgent Bills, such as matters of supply or further crisis response.

Given this, we consider it is unlikely that the BIF Amendment Bill will come before Parliament until later in the year, however, we do think it will be passed as law before the October 2020 State Elections to deliver on previously committed election promises before the State election.

If you would benefit from assistance in understanding how these changes may impact your business or having your current contracts and business practices reviewed in light of these changes to ready your business for compliance, email or contact Nathan Chalmers nathan.chalmers@merlehangroup.com (+61401641315)